When migrating from a standard switch to a VMware vDS, how do we handle Link Aggregation Control Protocol (LACP) if we are using Virtual Switching System (VSS) uplinks to connect to physical switches?

When you want to perform a live migration of virtual machines (VMs) from a standard switch to a VMware vDS  with no downtime, there a few extra steps to take.

If you can allow an interruption on the VMs, this will simplify the process. Migrating the VMs to another host won't help because the port group will not exist when you try to bring the VMs back with vMotion.

First, let's clarify that the load-balancing algorithm used in this case is "Route based on IP hash." The image below shows where this is configured on a standard virtual switch. 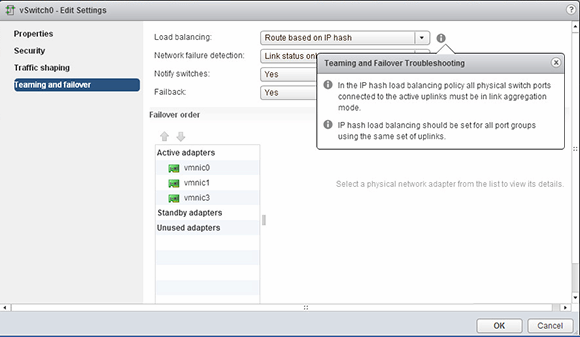 Where to configure load balancing on a standard virtual switch.

If VMs can be powered down

If VMs need to stay powered on