When Markley Group decided to add cloud services to its Boston, Mass., data center co-location business, the team did its research and polled customers. Markley became a VMware cloud service provider, tapping vCloud for Infrastructure as a Service cloud hosting.

At One Summer Street in Boston's Financial District, Markley's co-location data center -- billed as the largest and longest-running in New England -- hosts mission-critical client operations on more than 50 network service providers, either switched or POP connected. About 250 major enterprises use Markley for co-location.

Why did you choose VMware cloud services?

Aaron Patrick: VMware offers a mature management tool. VMware vSphere virtualization has been around for a long time, obviously, and VMware has management features for every aspect of the infrastructure. Markley polled our co-location customers, and most already use VMware in their data centers. Basing MCS on VMware vCloud simplifies interoperability with customers' stacks, and they already understand how VMware works. Since most customers have VMware infrastructures already, migrations don't require complicated conversions. It's a very natural transition.

For non-VMware customers adopting MCS, we have a few options. With a straightforward workload, we forklift the data, configuration files and databases into a newly provisioned cloud system. For heavily customized systems, there are various conversion tools available. We can convert any virtual machines [VMs] that we can't move directly into the cloud. We're also considering partnerships with vendors that specialize in these services.

What do enterprise IT customers get out of VMware cloud services?

Josh Myles: We launched Markley Cloud Services in March 2013, after extensive proof of concept and beta testing with existing Markley customers. About half of MCS adopters are our co-location enterprises branching into the cloud, and about half are new customers that strictly use MCS.

Other adopters use MCS as a virtual swing space, where they can spin up apps in the cloud while migrating co-location to Markley's data center. There's a back and forth of traditional computing and cloud computing. 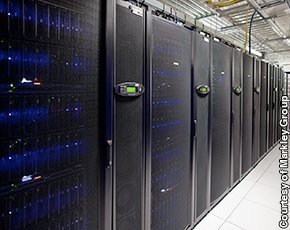 Markley's infrastructure in its data center at One Summer Street

Patrick: We based MCS's virtual infrastructure on vSphere 5, with vCloud Director for cloud orchestration. End users get a self-service, web-based interface, where they can deploy VMs, delete them, take snapshots, create templates, deploy private networks and enable network services. We also expose the vCloud RESTful API to users.

We expose vCloud Connector so users can transfer VM templates in and out of the cloud. It's useful for customers making transitions via cloud services.

Is there anything missing in VMware's vCloud Suite?

Compare the cloud services on cost

VMware as provider, or partners?

In the future, we'd like to enable more cloud options beyond VMware. We don't want vendor lock-in. We're kicking tires on other cloud infrastructure options, looking for a self-service interface that can manage more than one hypervisor, for instance.

How does a VMware-hosted cloud compare to Amazon Web Services?

Myles: Co-location customers eliminate bandwidth charges and latency issues in the network when they move from a third-party provider like [Amazon Web Services] AWS to Markley's cloud. Our data center hosts both their physical and cloud infrastructures.

Patrick: From a systems management perspective, customers can extend their [local area network] into Markley's VMware cloud and use the exact same management tools for both.

There is a test and development use case for our cloud services. The low-latency and high-speed connection is useful in this context, as developers can easily move images in and out of the cloud environment without incurring bandwidth charges. 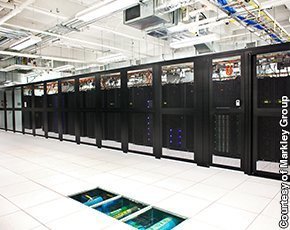 Markley can section off pods within its data center

Myles: Markley is also more nimble with special requests, as a private VMware cloud provider, than AWS or other giant public cloud providers. For example, a client might want to run an intrusion detection simulation, on the order of DDoS. With other public cloud providers, the test's required bandwidth -- 600 MB/sec -- is a real concern. Markley can implement specific policies to accommodate the unique bandwidth situation, running the test without destroying the network.

Given our enterprise customer base, we handle private cloud requests. Markley carves out public cloud pods -- locked-off physical resources in the data center -- as secure private clouds. While this doesn't happen overnight, it's still a level of flexibility that commodity public cloud doesn't approach.