Research can only teach a cloud computing admin so much about VMware's vCloud infrastructure. To create provider-hosted and at-home virtual data centers and map these objects together into a functional private or public cloud, you need a hands-on vCloud Director lab.

VMware vCloud Director unites VMware vSphere and vCenter into a private or public cloud infrastructure stack. VMware abstracted away most of your typical virtualization control -- hosts, clusters, resource pools and vCenter servers -- in vCloud Director (vCD). What's left is a vCD-based virtual data center (VDC) with its own virtual resources and vApps, which package virtual machines (VMs) together to execute applications.

Don't underestimate the resources needed to make a lab useful.

A self-service catalog in vCD provides vApps for quick deployment. If you use vCD, you won't know which hosts or clusters your VMs run on, just that there are plenty of resources in the virtual data center, that vCD is highly available and that it is secure from other entities running in the cloud. The vCD admin provides the necessary vSphere resources for provider data center-hosted VDCs that are expected to have unlimited capacity, availability and security.

Given this shift in VMware infrastructure management, you cannot master the many new concepts of vCloud just by reading about them. You need a vCloud Director lab environment to learn hands-on. You might just want experience or perhaps you plan to use your cloud knowledge to further your career or to obtain a certification like the VCP-Cloud.

If you already have a decent vSphere lab with vCenter, you can easily build a vCD lab on top of the stack.

A "decent vSphere lab" should have:

Your vCloud Director lab could run on two to four physical servers, if that's an option financially. If not, set up the vCD lab in a virtual environment on a single physical host, using VMs. It can even go inside a test-and-development virtual environment like VMware Workstation or Fusion.

If you run the vCloud Director lab 100% virtually, prepare for a resource management challenge. Even with a Macbook Pro laptop with a solid-state drive and 16 GB of RAM -- a fantastic virtual environment for a vSphere lab -- vCloud Director will stress your resources once you begin nesting powered-on VMs in the lab. 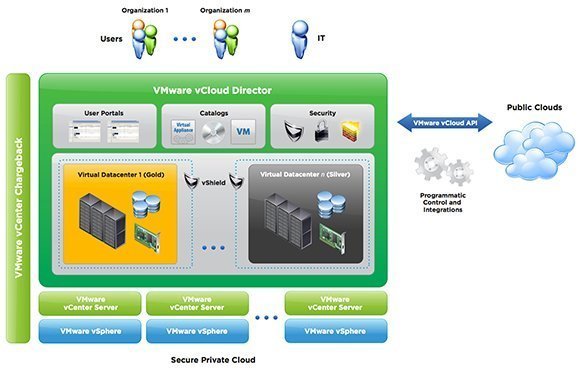 To create a vCloud Director virtual lab, add a few more things to that vSphere home lab. These will really start to strain your resources:

Production environments based on vCloud Director combine a Linux installation, a database installation (likely on a separate server) and a vCD installation inside the Linux OS. For testing and evaluation, VMware offers a downloadable vCloud Director appliance that includes Linux, a local Oracle database and vCD already installed. It has some limitations, such as only creating one vCD cell, talking to two vCenter servers, and capping production at up to 10 organizational VDCs, 100 VMs and up to 11 GB of info stored in the embedded database.

What to consider when vCD meets the real world

In a production vCloud infrastructure, best practices dictate that you create a management cluster of physical servers to run the cloud's management applications, as well as a resource cluster that provides compute resources for the VMs and vApps running in the cloud. You can skip this step in a vCloud Director lab environment.

Whenever you build something, tips and tricks can speed up the process. Here's some handy knowledge for building a vCloud Director lab:

Once you've established a useful vCloud Director home lab, you can start working with vCD and virtual data centers.