As a VMware educator, part of my job requires that I be aware of various VMware tools on the market. Recently I came across a tool from TriLead called VM Explorer. They offer a free version of their full product, and I love free VMware tools, so I tried it out. I learned that VM Explorer, also called VMX, does more than let you explore your virtual environment – in fact, the pro version is a viable alternative to VMware Consolidated Backup (VCB) for smaller companies running VMware ESX.

VMX has a GUI interface, a job scheduler, can copy directly to a NAS or SAN, and offers features like task history, email on completion of backups, virtual machine (VM) guest restore, Secure Shell (SSH) and remote desktop protocol (RDP) access to VMs, cloning and snapshot management, which are all features VCB doesn't offer, for the relatively low price of $490 Euros. And for administrators like myself who enjoy trying new free VMware tools, the free version of VMX is a surprisingly useful backup and management tool on its own.

What is TriLead's VM Explorer?
I found out that TriLead is a company out of Switzerland that develops programming libraries -- not your typical VMware Application development firm. Still, it seems that they have developed a very useful tool. The company describes the tool as a "virtualization management tool used to ease management, backup, and disaster recovery tasks in your VMware Environment." As a quick rundown, here's what it offers:

Although the tool is available as a free download, the free edition doesn't include a couple of features. The full-featured version includes the job scheduler, full technical support, and unlimited devices (for a full comparison of the free and pro editions, check out the VMX edition comparison chart.) 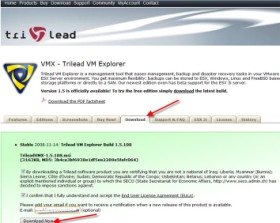 As VMX is only a 3.1 MB file, it downloads and installs quickly. I had the main VMX window up less than 30 seconds after the download. 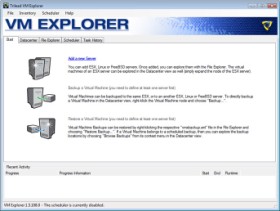 Using VM Explorer
The first thing you need to do to make VMX useful is to add hosts to it. I added an ESX host, like this: 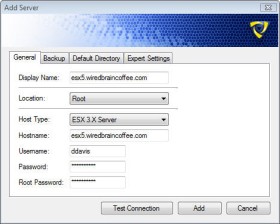 That took me to the data center view, where I clicked on my new server and VMX quickly displayed the type of server, all of its storage volumes, all of the VM guests running on it and their statuses, like this: 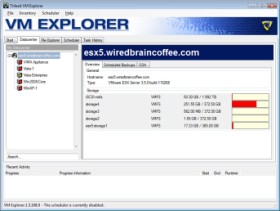 From there, I could use SSH to connent to the ESX or Linux host with the SSH tab (you're automatically logged in), check on the scheduled backups for that host (with the Pro Edition), or look at the guest VMs. When I clicked on one of the VM guests, I was able to get information about the OS type, its virtual hardware, current performance statistics, virtual storage information for the guest VMDK, and the ability to connect to the VM directly to the application via Remote Desktop Protocol (RDP) or SSH.

If you right-click on the VM, you are presented with several options, like this:

As you can see, you are able to locate the VMX and VMDK files for this guest VM in the File Explorer, Power off, Power On, Shutdown Guest OS, Unregister VM, Clone, Backup, or Manage Snapshots for each VM Guest.

I particularly like how I can clone and backup VM guests directly from this interface. Here is what the backup window for a VM guest looks like: 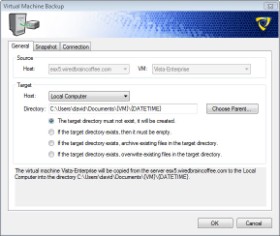 Keep in mind that these backups are clean backups of each VM, and require no downtime of the guest. This happens because VMX will snapshot the guest VM and back up the snapshot. Also notice how automated directories can be created with variables for the name of the VM and the date and time. This is especially useful for the scheduled backup options.

Finally, you don't have to backup the guest VM to your local Windows PC. You can have the backup directly sent to a Linux host or to a SAN connection on that ESX host.

With all these features, I can see VMX being a good option for a small shop that had a handful of ESX hosts sending their backups to a Linux SAN or iSCSI SAN on a nightly schedule.

Using the job scheduler in VM Explorer Pro
I wanted to try out the job scheduler, so I got an evaluation key to activate it. After doing so, I right-clicked on one of my VM guests and clicked Create New Backup Schedule.

As you can see from the graphic above, I was able to quickly create a simple scheduled backup for a VM guest.

Here is what my job scheduler window looked like with my scheduled backup jobs: 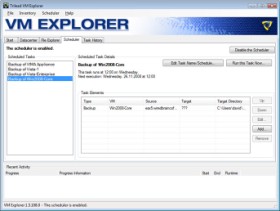 Bonus: VM Explorer also tells you how to enable SSH Access for ESX and ESXi hosts. That means instead of just telling you to enable SSH so it can perform a particular task, it offers step-by-step instructions for enabling SSH under the Help toolbar option. Here is what it looks like: 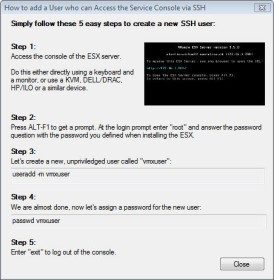 A number of companies have offered free VMware tools of some kind, but many of them are filled with ads for the full version or offer severely limited features in comparison to the full version. TriLead's free version, on the other hand, is a healthily-featured starter version of their full product. VM Explorer is a very useful tool that I recommend you review for yourself.

ABOUT THE AUTHOR: David Davis (CCIE #9369, VCP, CWNA, MCSE, CISSP, Linux+, CEH) is the Director of Infrastructure at Train Signal, Inc. He has written hundreds of articles and six video training courses – including the Train Signal VMware ESX Server video training series. His websites are Happy Router.com and VMwareVideos.com.