For virtualization administrators, the rapidly expanding VMware certification path can be a daunting one to negotiate. VMware continues to expand its certification offerings faster than any other technology company. With so many new certifications and certification tracks being created, now is the time to learn about what VMware offers, where to get help and how to get started on a particular certification track.

VMware's best-known certification is the VMware Certified Professional (VCP). As VMware's first certification -- and the one that has been available the longest -- it's also the most popular and most recognized certification. However, as VMware has branched out from offering just the ESX hypervisor to releasing  a larger suite of products, its certification offerings also needed to branch out.

To that end, VMware has broadened its certification portfolio to include tracks that cover cloud computing, data center virtualization, end user computing and network virtualization. 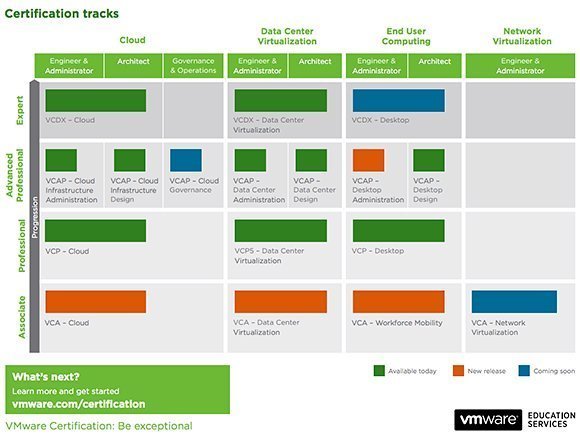 As you can see, each area of specialization is broken up in to four different achievement levels: Associate, Professional, Advanced Professional and Expert.

VMware tends to release certifications into a public beta program before they are released into general availability. For example, with the VCP for vSphere 5, the company released the VCP-511 as a beta, then released the VCP-510 for general availability. It continues to do this for just about every new certification -- and corresponding exam -- that it offers.

These beta programs have three advantages: You get to potentially achieve that certification before others do, you save money as the tests are made available at a discount, and you provide feedback to VMware on the future certification exams. Information about beta classes can be found at the VMware Training site here.

The VCA certification option is one example of a series of exams that recently came out of the beta process.

With the VCA, VMware offers free classes and learning resources on its Transform Your Career site. This site gives traditional IT pros whose current level of knowledge is fading an opportunity to get proficient in virtualization and cloud computing to advance their careers.

Additionally, VMware has four VCAs, which match up with the four areas of specialization offered by the VCP: data center virtualization (DCV), workforce mobility (end user computing), cloud and network virtualization. The Transform site and attached free e-learning are offered in six languages.

Which VMware certification path should you choose?

With so many VMware certifications being offered now, it's easy to get confused about what is out there and to keep track of what's been released.

For those new to VMware certification, I recommend the new VCA. Specifically, I would follow the VCA in DCV because it starts a foundation of knowledge for the other VCA options. Also, this VCP is the logical next step for many VMware users.

For those who already have a VCP, I would recommend the VCAP. If you are more of an administration and troubleshooting ace -- or want to be -- I would go for the VCAP in data center administration, or DCA, as it really proves you have that knowledge. If you are more of a consultant -- or want to be more of one -- I would recommend the VCAP in data center design, or DCD.

Alternatively, those with the VCP could branch out their knowledge to other VCPs, such as the VCP desktop or VCP cloud. I plan to add to my VCP-DCV and VCAP-DCV certifications with more end-user computing certifications, likely starting with the VCP-Desktop.

More resources are available at the VMware certification site here.