VMware offers three virtual disk types for virtual machine (VM) file storage. But how do you know which type is best suited for VMs? The answer isn't always obvious, because each disk type offers different benefits: One, for example, offers better performance during initial disk writes, a second is more secure and a third is optimal when disk space is a key factor.

This tip defines virtual disks, explains the three main types of virtual disks and makes recommendations on when to use each type.

There are three main virtual disk file types that you can use with ESX : thick, thin and raw.

Raw disks
A raw disk is referred to as raw device mapping (RDM) and enables a virtual machine (VM) to have direct access to a logical unit number (LUN) on a storage area network (SAN). This means that a VM's disk data file does not reside on a Virtual Machine File System (VMFS) volume. Instead, a small disk descriptor file is created for the virtual disk in a VM's working directory on the VMFS volume.

Thin disks
As disk write blocks are created, thin disks start small and grow to a preset maximum size. If you create a VM with a thin 10 GB disk, it will initially be 1 MB in size and, over time, grow to a maximum size of 10 GB. As they grow, thin disks pose a slight performance penalty, because space is allocated on demand. Also, the first write to a disk block is zeroed on demand, which creates an additional performance penalty. Once the disk has grown and its block has been zeroed, however, thin disks perform similarly to other disk types.

Thin disks are useful for conserving disk space on a VMFS volume but can cause problems if you fail to monitor their growth. Thin disks are often the default choice on Network File System (NFS) data stores. But their appropriateness is determined by the allocation policy of the NFS server and not the VMware ESX server. With thin disks, it's important to note that you see only a disk's actual size when using the VI Client data store browser. If you use a different method, such as the command line Ls command, the command returns the maximum size of the disk and not its current size.

2GBsparse
Additionally, there is a special format called 2GBsparse. 2GBsparse divides a disk into multiple disks with a maximum size of 2 GB per disk. A VM with a 20 GB disk in this format, for example, would have its disk divided into 10 2 GB disks. VMware Workstation and VMware Server can use this format, but unless you first import into a thick or thin disk format, you can't power on a VM in this format on an ESX host. This format is sometimes used to break down larger VMware ESX disks into smaller pieces that can be copied to other ESX hosts or to physical media so that they can be delivered elsewhere.

Determining disk type
So which disk should you use for VMs? If you are concerned about disk space on VMFS volumes, using thin disks is a smart idea. If you are concerned about security and want slightly better performance on initial disk writes, use eager zeroed thick disks. If you want easier administration, use the default disk type (lazy zeroed thick disks). Note that once an initial write to a new disk block has been completed, disk performance is equal across all disk types. If you run an application inside a VM that is SAN-aware and needs direct access to a SAN LUN or if you use a clustering solution like Microsoft Clustering Server that requires two VMs to access the same disk file, use RDM.

Creating a new virtual machine with an alternative disk type
If you want to use a disk file type other than the default, you must use the vmkfstools service console utility application. 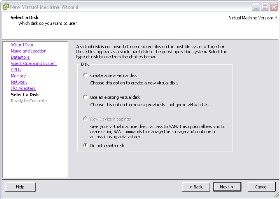 Changing disk types in an existing virtual machine
If you want to change the format of existing disks, you must use the vmkfstools command. Make sure your VMs are powered off and do not have snapshots running. Here is a list of commands and an explanation of what they accomplish:

ABOUT THE AUTHOR: Eric Siebert is a 25-year IT veteran who specializes in Windows and VMware system administration. He is a guru-status moderator on the VMware community VMTN forums and maintains VMware-land.com, a VI3 information site. He is also the author of an upcoming book titled VI3 Implementation and Administration due out in June 2009 from Pearson Publishing and is a regular on VMware's weekly VMTN Roundtable podcast.