In this tip, I'll explain how to create a Windows AD group and have vSphere use the group to control who can administer the virtual infrastructure.

Creating a Windows AD group to be used for vSphere administration
Windows Active Directory is likely your single repository for credentials (usernames and passwords) on your network. You want VMware to use Windows AD, not to create another credential repository. Luckily, VMware has this functionality built in and it is very easy for AD and VMware to work together.

Even if you are the only VMware administrator on your network, you should start off by creating a Windows group called "vSphere Admins." You might be the only person in that group initially, but you can add other people later. You could also create other groups and name them "vSphere Desktop VM admins" or "vSphere Web Server admins," for example. These people wouldn't have full access, but could administer specific VMware virtual machines that fall into their area. You could even get more specific and create a group named "vSphere Support Techs," giving those users power-on and power-off rights to specific virtual machines.

Let's create a "vSphere Admins" group. To do this, just go to your Windows DC and run Active Directory Users and Computers (or run it remotely).

Once running, simply create a new global security group inside your Windows AD called vSphere Admins, as seen in the image below.

Next, add yourself and any other vSphere admins to that group, as seen here:

That's it for the Windows AD side. Now let's cover what you need to do in vSphere.

Configuring vSphere to use your Windows group to control administration
Once you have your Windows AD group and your users inside, you need to tell vSphere to use that Windows group. Assuming that you are going to give full vSphere administrator rights to the users in these groups, click on the highest level in the Inventory tree in the Hosts and Clusters Inventory. This should be the vCenter server for your virtual infrastructure.

To add the new group, right-click in the whitespace of the permissions tab and click Add Permissions.

This will result in the Assign Permissions window appearing. On this window, you will click Add to add new users and groups. 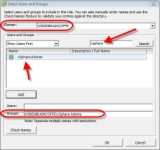 From here, I clicked OK.

Back in the Assign Permissions window, the vSphere Admins were added but they only had Read-Only permissions by default.

On the right-hand side, I used the drop-down menu under Assigned Role and scrolled down to Administrator.

Next, I clicked OK to make this administrator role assignment to the vSphere Admins group take effect.

At this point, we had two different groups able to make administrative changes to vSphere.

Now, we need to remove the default administrator's group. To do this, right-click on it and click Delete. You will get a Confirm Removal message. Click Yes to continue.

At that point I was immediately kicked off my vSphere client -- you will be as well, because you signed in as the administrator, right?

Testing the new Windows AD / vSphere security configuration
To test it out, all you need to do is to connect to the vSphere client. You will log in as yourself and use whatever username and password you defined for yourself in the Windows AD. If you are already signed into your PC using a Windows AD login, and that login is the same as a Windows AD login defined in new vSphere Admin group, then you can click Use Windows Session Credentials -- you don't have to enter a username or password to connect.

As I hadn't logged in to the domain on my PC, I manually entered my Windows domain username and password.

The vSphere client successfully logged in as "ddavis" (that's me). I no longer had to log in as the Windows Domain Administrator.

Finally, I went to the permissions tab of the vSphere vCenter server and verified that only the WiredBrainCoffee.com domain group called vSphere Admins was able to log in and control the virtual infrastructure.