In the last section, we configured and secured Linux. Now it's time to work on the Management User Interface. Unlike the Windows version of VMware Server, the VMware Server Management User Interface (MUI) is a separate component to be installed in the Linux version. This section details how to obtain the MUI, how to install it, how to secure and configure it, and how to log in.

Installation
The first step to installing the VMware Server MUI is to change directories to "/usr/local/src/vmware-mui-distrib-1.0.1-29996". Once you have done that, type: 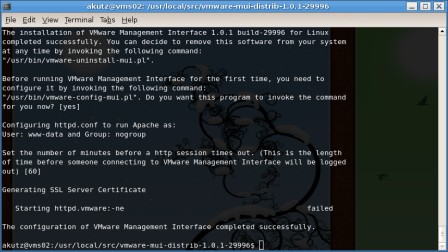 You will notice that the VMware Server MUI http server failed to start. This is because it is misconfigured for Edgy Eft, and we need to make some manual changes in order to make sure that it will function properly.

Configuration
Now let's look at how to configure.

This stanza is the problem. Edit this text so that it resembles:

Once you have made these changes, save the file and exit. Now type the following to start the VMware Server MUI:

There is a small problem. The file we just edited will get replaced with a "clean" version the next time the server reboots. We have to edit the "clean" version so that it has the above changes as well.

The file we need to edit is /usr/lib/vmware-mui/src/lib/httpd.vmware. Apply above changes to this file as well. Now the next time the server reboots the changes will be preserved.

/usr/lib/vmware-mui/apache/conf/httpd.conf
By default, the VMware Server MUI will listen for incoming connections on all configured network interfaces. Just like the reconfiguring the vmware-authd daemon to only listen on the management interface NIC, we must do the same for the VMware Server MUI. We must first change directories to "/usr/lib/vmware-mui/apache/conf". Now type the following command where MGMT_NIC_IP is the IP address of your designated management interface NIC:

We also need to make this change to the source file for httpd.conf. To do this, change the directories to "/usr/lib/vmware-mui/src/apache/conf". Now execute the exact command we used to do the initial replacement. That's it. We are finished modifying httpd.conf.

Restart the VMware Server MUI with the following command:

Now the VMware Server MUI will only be listening for incoming connections on the management interface.

Logging in
You should now be able to point a Web browser at https://MGMT_NIC_IP:8333 and see the server's VMware Server MUI. However, there are few things to consider.

Only users that have privileges on VMs can log into the MUI. That means that although you may have a user on the server where VMware Server is installed, you will only be allowed to log into the MUI if your user account has execute privileges on a VM's vmx file. We will discuss file permissions and what they mean to VMs later.

Installation
Once you have downloaded the tarball, open a shell and change directories to the location of the download. Deflate the tarball and then, as I recommended earlier with the VMware Server and VMware Serve MUI source directories, rename the directory from "vmware-server-console-distrib" to "vmware-server-console-distrib-1.0.1-29996" or whatever version it is. This will help keep straight later versions of the VMware Server Console you might download.

Change directories into "vmware-server-console-distrib-1.0.1-29996". To install the program, type:

The installation is straightforward and it is fine to accept all of the defaults.

Once you are connected to the remote server, proceed to the next section for instructions on how to create your first VMware on Linux VM.

About the author: Andrew Kutz is deeply embedded in the dark, dangerous world of virtualization. Andrew is an avid fan of .NET, open source, Terminal Services, coding and comics. He is a Microsoft Certified Solutions Developer (MCSD) and a SANS/GIAC Certified Windows Security Administrator (GCWN). Andrew graduated from the University of Texas at Austin with a BA in Ancient History and Classical Civilization and currently lives in Austin, TX with his wife Mandy and their two puppies, Lucy and CJ.