Many virtualization administrators find in VMware Workstation's networking configuration and its Virtual Network Editor intimidating and difficult to master.

1. Bridged/VMnet0. The first kind of network connects virtual machine (VM) guests to the host's network adapter as if the two are connected to a hub. Both the host and guest have different MAC addresses and different IP addresses. This is the most common virtual network choice and the virtual network that I choose 99% of the time. 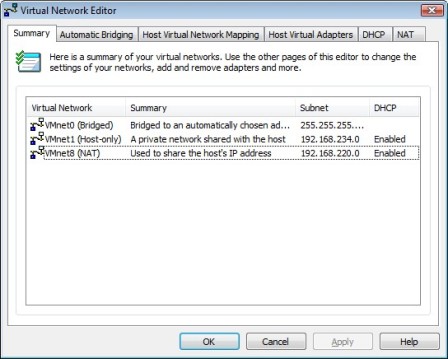 2. Host-only/VMnet1. The second kind of network connects the VM guest and the host computer into a private network. With the host-only network, the guest and host are connected by a virtual adapter on the host and the virtual network interface card on the guest. The guest cannot get to the LAN or Internet to which the host computer is connected. Because there is no LAN access with this method, VMware virtual networking offers a Dynamic Host Configuration Protocol (DHCP) server, enabled by default, which provides IP networking on this network. The DHCP range for the host-only virtual network is 192.168.234.0-254, where the host virtual adapter is 192.168.234.1 and all guest VMs using the host-only network pull IP addresses from the VMware DHCP server.

3. NAT/VMnet8.The third network type connects VM guests to a LAN but using a private IP network between the VM guest and the host computer. Similar to the host-only network, when using the NAT network, VMware Workstation provides a DHCP Server in this virtual private NAT network (as it is needed unless you assign static IP addresses or you create your own DHCP server in the virtual NAT network). The DHCP range for the NAT virtual network is 192.168.220.0-254 with the host virtual adaptor being 192.168.220.1 and all guest VMs using the NAT network pulling IP addresses from the VMware DHCP Server. 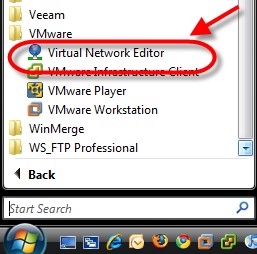