VMware administrators sometimes underestimate the capabilities of conversion tools. This could be because at one time, conversion tools did just that -- conversions -- and not much more. But today's conversion tools surpass the scope of first generation products' capabilities. While VMware's vCenter Converter supports only VMware hypervisors, third-party offerings such as Vizioncore's vConverter can perform physical-to-virtual (P2V) and virtual-to-virtual (V2V) conversions that are hypervisor agnostic. VConverter can also double as a cost-effective disaster recovery tool. The multiplatform ability should prove increasingly popular for businesses with mixed-hypervisor data centers.

VConverter offers a wizard that enables easy conversion of physical or virtual systems to virtual platforms. The wizard analyzes the server or workstation to be converted and allows the destination to be selected based on what is configured in the host inventory. For the ESX destination I have configured, the conversion wizard allows the selection demonstrated in the following image.

As the wizard progresses, standard options, such as drives to convert and geometry changes, are permitted before a conversion launches. One nifty feature is that the destination host can be configured with a TCP/IP address on the converted network that may differ from the system before a conversion. 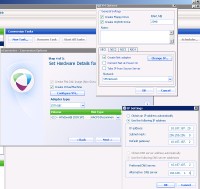 Once the conversion task is complete, the guest OS is added to the host's inventory and booted up. VMware Tools is automatically installed on the new guest OS, along with managed hardware configurations to match the destination environment. Like other live conversions, the new guest is a crash-consistent system. So if possible, make sure that the system's conversion is performed during a low-traffic period. At this point, the server is converted and ready to use.

Other features
Despite its relatively young age, vConverter provides several useful features. Among them is an email notification feature to send messages at the start and completion of conversion tasks with relevant logs.

Additional features: RDM conversion support and more
Among the other features of vConverter are conversion support for raw disk mappings (RDMs), IP address changes during the conversion process and remote cold cloning. The remote cold cloning functionality differs from traditional products in that instead of booting from a CD-ROM, vConverter sends a boot loader as well as a boot image to the destination system to start the conversion task in a zero-transaction state. The Preboot Execution Environment (PXE) can aid this process. vConverter also provides a boot CD for cold clones with a VistaPE boot environment. In addition to the disk and remote cold-cloning conversion method, vConverter also supports file-based and block-based transfers.

VConverter also offers a virtual appliance that can be used in lieu of the file transfer agent that would occur on an ESX host. The step that adds a host to vConverter drops a small, secure FTP (or File Transfer Protocol) agent on the host that is used during the conversion exchange. Using the virtual appliance replaces the use of the Console Operating System (or COS) for conversion tasks.

While limited to Windows, this inventory of platforms works for most conversion scenarios simply because newer systems on Windows Server 2008 or Vista could initially have been built as a guest OS. Currently, support for non-Windows conversion is not offered.

Disaster recovery configuration
The other key feature that vConverter offers compared to standard conversion tools is the continuous protection feature. Continuous protection schedules a replication of the VM to a different host in another data center, so this function serves as a cost-efficient disaster recovery (DR) solution for guest OSes. This is done in the same interface as typical conversions, simply selecting the continuous protection option and selecting a schedule, and can be prioritized based on business need, network traffic and other factors. The graphic below shows the configuration of the DR feature for vConverter:

This feature may sound a lot like Vizioncore's vReplicator product, but there are differences. VConverter is multi-hypervisor aware, and vReplicator is more expensive per host but has additional management for the replication process.

Pricing for vConverter
VConverter's base pricing model works for many environments, including organizations that are not ready for a full-blown investment. As with most virtualization products, a fully functional time-limited edition is available for download from the Vizioncore website. If you decide that vConverter works for you, there are two main pricing options based on the functionality described above.

The product will continue to function beyond the term of support, and varying volume discounts are available through channel partners.