With all the third-party VMware ESX performance tools available and their varying degrees of functionality, it can be difficult to choose which one to use. In this tip, I'll explain why you need a third-party performance tool, what Veeam Monitor offers and my experience with the tool.

More specifically, you want to use a third-party performance tool with VMware ESX Server/VI Suite for the following reasons:

What is Veeam Monitor?
Since 2006, Veeam has offered virtualization tools . Originally Veeam was known mostly for its free FastSCP and Reporter products. Today, it's more noted for Veeam Backup and Veeam Monitor offerings and its acquisition of nworks.

Last month, I received an email stating that Veeam was offering a free holiday gift. That gift turned out to be a free, scaled-down version of the Monitor performance monitoring tool. While it was initially marketed as a holiday gift, Veeam has made its new Veeam Monitor free indefinitely.

Before I discuss what Veam looks like, I want to outline what Veeam Monitor offers.

I have recently evaluated several virtualization performance tools, and what immediately catches my eye about Monitor free edition is that it uses the VMware API and supports ESXi. Numerous other products offered as virtualization performance management tools are actually Simple Network Management Protocol (SNMP) network monitoring tools that have been modified to gather stats from VMware ESX servers. The downside is that they cannot support ESXi, as ESXi doesn't offer SNMP reads (only sending traps). With the VMware API, Veeam Monitor can do a lot more than any SNMP-based tool. But SNMP tools can manage performance of just about any SNMP device, whereas Veeam Monitor monitors performance of only VMware ESX/ESXi hosts. 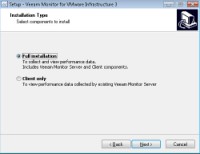 The fact that the product offers a choice between the full server and client install or the client-only install is attractive. This shows that Veeam Monitor is a true client/server application. 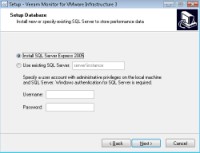 It's also a plus that I could either install SQL Express or use my own already-installed SQL Server. The fact that the back end is SQL indicates that this application has a strong back-end infrastructure (unlike many other free applications). 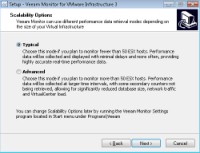 In addition, you are given scalability options for monitoring either fewer than 50 or more than 50 ESX hosts, which indicates that Veeam Monitor is enterprise ready.

Installation was easy but time-consuming because of the inclusion of SQL Express. Once I installed it, I ran Veeam Monitor and clicked Add VCM to tell Veeam Monitor to connect to my Virtual Center server.

To do so, I simply filled in the host name and the credentials, as seen below.

Again, compared with other free virtualization performance monitoring tools, Veeam Monitor has an advantage because it can connect to VirtualCenter (now vCenter) and gather information and statistics about all the ESX/ESXi hosts.

Let's look at some of these features.

In Figure 5, you see that I can run a graph of memory utilization (active, ballooning, shared, overhead and consumed) for all ESX hosts in my virtual data center over the past 24 hours. Similar graphs are available at just about every level of the infrastructure for CPU, disk, network and swap. I was able to do this for the past hour and past 24 hours. However, I discovered that with the free version I could graph any historical information for the past week, month or year. 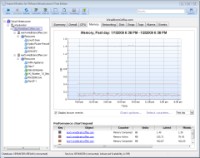 In the next graphic, you can see how I can quickly find the VM guests that are using the most (the top) CPU, memory, disk, network and swap on the ESX host selected. 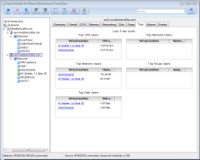 Another attractive feature of Veeam Monitor is that it offers full-featured alerting via email (which could also go to SMS text) or SNMP traps. I was able to add new alarms even in the free version. 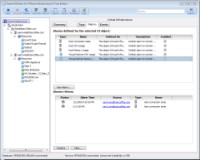 All ESX host and VM guest events are also available in the events tab at each level of the virtual infrastructure. You can even create alarms based on those events.

While using Veeam Monitor, there were a couple of areas that I was told I could not use. Modeling wasn't available, trending wasn't offered, I couldn't see performance for a week or more in a graph, nor could I run reports. Here is what I saw when this happened:

Still, this free application offers so much functionality. Compared with other free applications, you would think that Veeam would charge something -- even a few thousand dollars -- for this limited functionality. For me, the free functionality provides all I need in a modest (five to 10 ESX hosts) environment. I would, however, spend the money to move to the full version to gain the extended historical performance graphing and reporting.

One final cool feature is the ability to access a virtual machine's console in a console tab for each VM guest, like this: 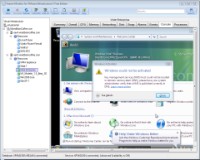 ABOUT THE AUTHOR: David Davis (CCIE #9369, VCP, CWNA, MCSE, CISSP, Linux+, CEH) is the director of infrastructure at Train Signal Inc. He has written hundreds of articles and six video training courses, including the Train Signal VMware ESX Server video training series. His websites are Happy Router.com and VMwareVideos.com.