As a VMware system administrator, you can monitor memory usage in the VMware Infrastructure Client (VI Client)....

You can also potentially free up a lot of memory throughout your virtual infrastructure by using VMware's esxtop tool with a secure shell (SSH) client to understand which virtual machines and processes are using memory and making appropriate changes.

In this tip, we look closely at how VMware uses memory, how to use the esxtop utility to get detailed statistics on your infrastructure's memory usage, and how Transparent Page Sharing (TPS) and ballooning work together to make the most out of your available RAM.

Checking memory with the VMware Infrastructure Client
As an example, I have taken screenshots from a host with 64 GB of physical RAM with 29 VMs running on it. In the first screenshot, we go to the VMware Infrastructure Client (VI Client), select the host and watch the summary tab. In the right-hand corner, we see the "Resources" section. The image below shows that memory usage is at 41.06 GB out of 64 GB.

From this image, we can see that 41.06 GB of memory is in use out of an available 64. But wouldn't you also like to know which processes or VMs are using the 41.06 GB? To find out, we'll use PuTTY as our SSH client to run VMware's esxtop tool.

Let's start a PuTTY session. Log on, start esxtop and press M for memory. The top of the screen features an impressive amount of info on your host's memory usage.

Let's take it from the top.

Note: The memory used by "other" is officially described as: "everything other than the ESX Service Console and ESX VMkernel." It is not necessarily all memory consumed by the VM. Each VM, for example, also has memory overhead. The amount of overhead memory depends on the type of guest OS,the number of virtual CPUs, configured amount of guest memory and on whether the guest is 32-bit or 64-bit. For example, a dual-CPU virtual machine with 2,048 MB memory will have 126 MB overhead as 32-bit system and 163 MB overhead as a 64-bit system.

The next line about VMKMEM is of less importance, though it does tell you how the VMkernel performs. But unless you're troubleshooting an unusual problem, you won't work with these values. Of more value is how the service console (cos) is doing, which is detailed on the next line. The first value (in this case, free) is the amount of idle memory in your cos. In our example, the cos has 92 MB RAM free out of the 800 MB allocated. Next, we see the swap space configured and swap space free, which are both 1,600 MB. Usually, I configure a host with a 1,600 MB swap partition and 800 MB cos memory.

While 800 MB may seem like a lot, third-party agents often run in the console and so the default 272 MB of memory is not enough. In that event, you want to increase cos memory and set it to 800 MB. You could set it for a higher number, but you might run out of partition space. I therefore always set the swap partition to 1,600 MB since you can also assign only a maximum of 1,600 MB to the cos. Since implementing that as a best practice, I haven't had to resize a swap partition once.

Back to our example, the Non-Uniform Memory Access, or NUMA, values in MB. As with VMkernel you seldom have to worry about these. It only shows you how ESX is distributing the memory across the NUMA nodes (if you have NUMA, that is) but these are not values you will be working with. Pay more attention to the PSHARE line. This one tells us how much memory is saved by transparent page sharing (TPS), which in some environments can be quite a lot. In our example, 32,492MB is shared between the VMs, of which 3,779 MB is common, which leaves us with savings of 28,713 MB (or 28 GB) of memory.

Let me explain this in a different way. On this host machine, a total of 32,492 MB is somehow the same in a lot of guests. By using transparent page sharing, ESX only needs 3,779 MB to "store" 32,492 MB. So we are saving 28,713 MB of memory. In my opinion, that is a large amount of memory to save on a single host. Just imagine how much this could save you across an entire virtual environment.

When looking at Windows Server 2003, for example, one can see that a basic Windows install without any extra applications will easily occupy 250 MB RAM after startup. Now suppose I run 20 Windows VMs on one hypervisor. 20 instances of Windows requiring 250 MB RAM each would cost a total of 5,000 MB physical RAM without TPS. With TPS, however, 250 MB would have been stored and used only once. In other words, a memory savings of 5,750 MB. That's not something to take lightly. 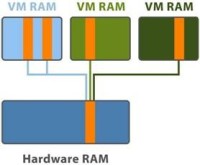 This may sound strange, but I believe both SWAMp and MEMCTL numbers should be 0. Let me explain what they are:

Now, why should they be zero? Simply put, because they are both indications that ESX doesn't have enough memory to give to the guests. The first thing ESX wants to do when resources are getting scarce is reclaim the least valuable memory from the guest OS. Because ESX can not talk directly to the OS, it uses the VMware Tools memctl-driver for this.

Ballooning
When VMware ESX runs out of guest VM space, ESX starts a process inside the guest which claims memory. The guest OS will then check the list to see if it has memory that is not in use. If there is, it will will give this to the process. Next, VMware Tools will claim this memory and tell ESX exactly which memory blocks ESX can reuse for other VMs. In this way, the last pieces of unused memory are squeezed out of the other guests to give it to the guests that need it more.

Swap to disk
If the ballooning technique isn't sufficient, ESX will use its last resort: swapping out guest memory to disk. As disks are always much slower than physical memory, the guest VM will notice a performance degradation so that is not the way we want to go.

Therefore, as soon as you see the SWAP curr or MEMCTRL curr rise above zero, you should really start investigating what is wrong. As a rule of thumb, you should never load your ESX memory to more than 80% or 85%. This way you always have spare memory in case VMs start to use more physcial memory. Also, loading your ESX hosts in a cluster at more than 80% to 85% can get you into trouble with your VMware High Availability failover level.

ABOUT THE AUTHOR: Gabrie van Zanten (VCP) has been in the IT industry for 12 years. Currently he is virtualization architect for a worldwide consultancy company and has designed and maintained virtual infrastructures for a number of customers. He has written articles for magazines and frequently publishes in-depth articles at his weblog, GabesVirtualWorld.