VMware Player 4 is a great tool to teach people about virtualization, and has some important practical applications that even IT pros can appreciate. In some cases, IT pros can even use VMware Player 4 as a free alternative to Workstation and save $100.

Perhaps you have had this experience: Someone asks what you do for work, so you tell them that you work in IT and specialize in virtualization technology. At that point their eyes glaze over, and they fear that you will corner them in the elevator and explain how to compile open source kernels or build dynamic link libraries . How do we help people learn about virtualization, without overwhelming them and sounding like silicone-based troglodytes? VMware Player 4 is a tool that can be a great initial stepping-stone to get people acquainted with the benefits of virtualization.

In some cases, IT professionals can use the tool themselves. Depending on their virtualization needs, some IT pros could find VMware Player 4 a viable free alternative to VMware Workstation. Player 4 lets a user create and run VMs, just like Workstation – albeit with fewer options and some limited functionality. Upgrading to Workstation gives you features like multiple snapshots, clones and virtual rights management, which are useful in software development and testing scenarios. Player is only good for very basic virtualization, but in some cases, that’s all an IT pro needs.

Sometimes great things come in small packages. However, it is rare when the small package is both functional, elegant in its simplicity and free. VMware Player 4 is just such a tool. And did I mention that it is free?

What is VMware Player 4?

Processor: 64 bit x86, at least 1.3 Ghz
Operating system:  Windows or Linux
Memory:  at least 1 GB.  But we all know that more memory is always better, so 2 GB should be considered a practical minimum
Display adapter:  16 bit or 32 bit, and use the latest driver for your video card
Disk Space:  200 MB for Linux or 250 MB for Windows

VMware Player 4 is a hosted virtualization hypervisor that operates on a Windows- or Linux-based computer and can run virtual machines (VMs), including both user-created and downloaded appliances. However, explaining it that way to someone unfamiliar with virtualization may lead to the familiar glazed-over look and desperate glances for the exit sign. Perhaps a less intimidating way to explain VMware Player 4 would be: VMware Player allows you to save money. Instead of buying another computer that will end up in your garage in a few years, just download a virtual computer that is nothing but a few files that you keep on your laptop and power it on whenever you need it. By the way, it's free.

VMware Player allows you to use your existing computer to run multiple virtual computers. Think of it as advanced multitasking. For example, if you want to dip your toe into the Linux operating system (OS), but don't want to buy new hardware and spend time learning how to install an OS, you can use VMware Player 4 to run a Linux VM on your computer, without having to reformat your existing hard drive, or converting your computer to a dual-boot configuration. Most people are quite adept at running different applications in different windows; Player is just like that, only you are running an entire OS in a different window. This flexibility can allow you to better use your existing hardware without the cost associated with purchasing new hardware for an additional operating system.

With VMware Player, you can run software that is only compatible with other operating systems. You could also use it for safe Web browsing. If malware infects a VM, simply get rid of it and create another one. There are even a few notable uses for VMware Player in an enterprise.

Installing VMware Player 4
You can download Player 4.0 at the VMware downloads page. 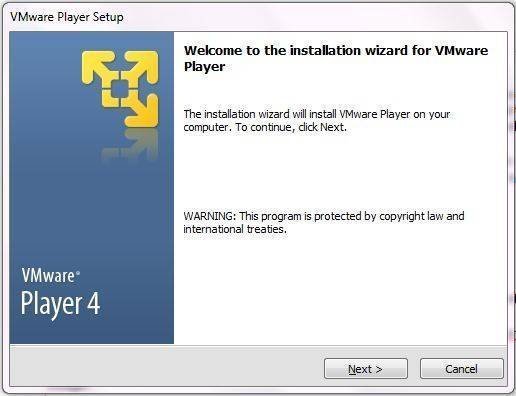 For this example, I will show you how to install it on a Windows 7 Professional host that meets the system requirements. Remember that the virtual guest machines you run on your host machine will also use up memory and disk space, so you will need to make sure that your host machine has enough extra resources to accommodate them. 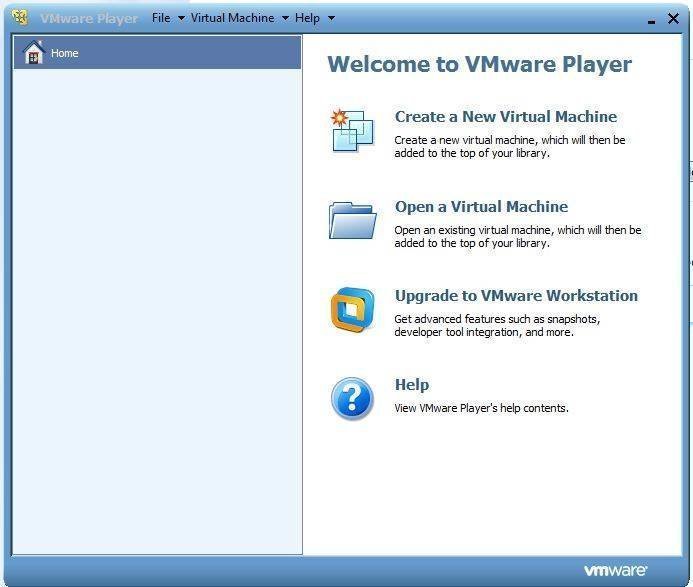 Once you have the file (for Windows, the current version is named VMware-player-4.0.2-591240.exe) you can simply double-click it to start the installer.

Accepting the defaults for the installation will ensure that you receive any updates to your version of Player as they become available. Once the installation completes (on my system this took less than a minute), you will be prompted to reboot. 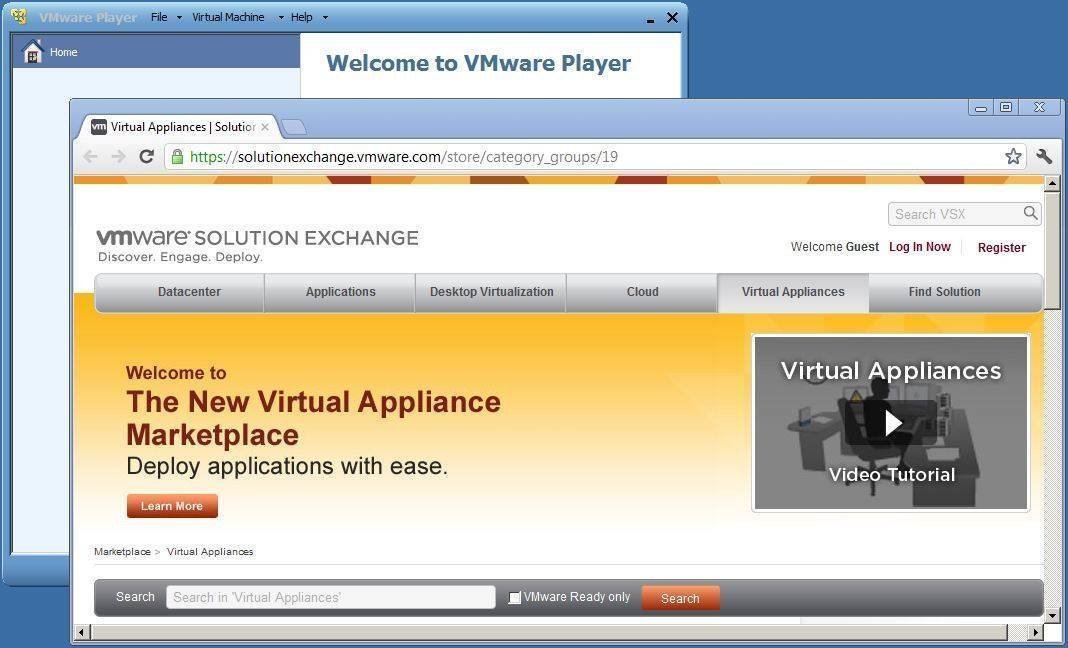 After the reboot, you can start Player from the Start menu or the desktop icon. You will then be presented with the main screen, as shown.

Using VMware Player 4:
One of the nicest features of Player is its simplicity. Three menu items is all you have to know:

File: Create and open VMs, download appliances and preferences.
Virtual Machine: Edit VMs and perform routine functions like power on/off or send a Ctrl-Alt-Delete to a VM.
Help: Get help, updates and options to upgrade to VMware Workstation. 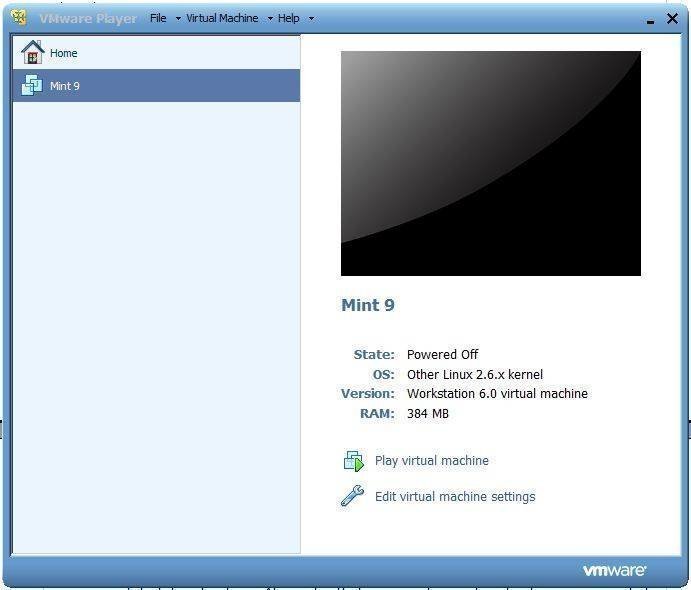 It is worth noting that Player 4 includes the ability create your own VMs, a feature that was not available in earlier versions.

For this example, I will use Player to download an appliance, start it up, and use it. This is a good way to get your feet wet using Player.

1. Once you have Player open, select File, Download a Virtual Appliance. A browser window will open to the VMware Appliance Marketplace. In this case, I am going to select Linux Mint, because it is an easy to use distribution of Linux even for someone with no previous Linux experience. The file is in a .zip format, so I had to unzip it after it completed downloading. Also note that your appliance download page may include useful notes like a user name and password to access the VM. 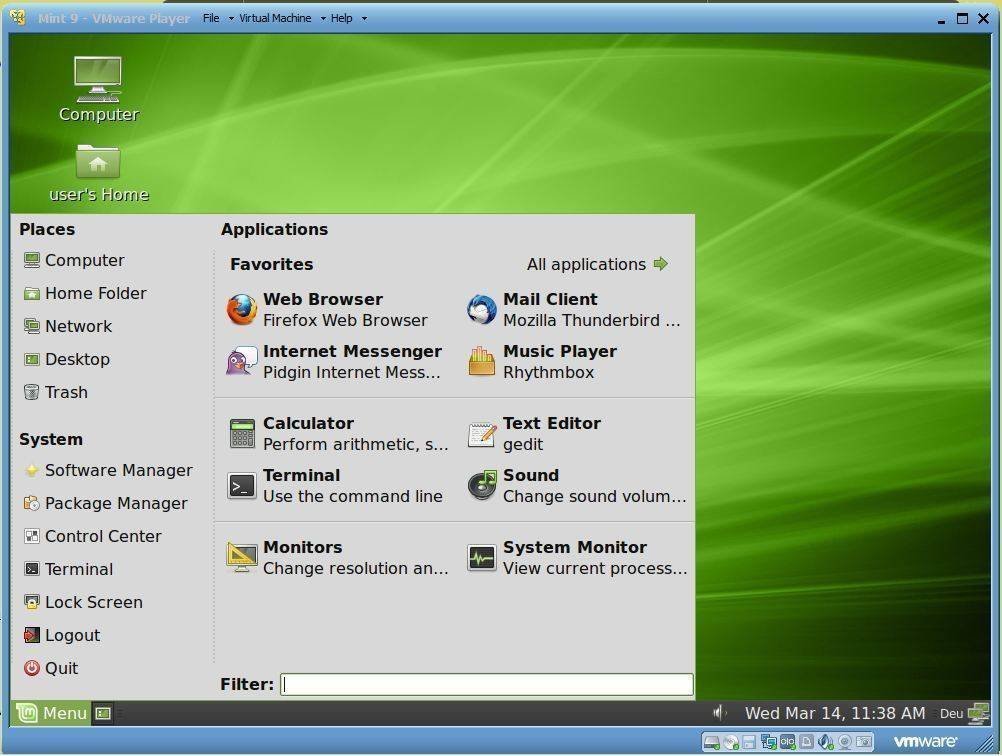 2. Once the download has finished, select File, Open a Virtual Machine. You will see a screen that looks like this.

VMware Player 4 is one of the simplest, most easy to understand tools available for introducing people to virtualization. Player's basic menu, built-in links to the VMware Appliance Marketplace, and its ease of installation make it very user friendly. Next time someone asks about your job, don't just explain it, introduce them to it!