VMware released VMware Server 2.0 in September, just prior to VMworld 2008. Although the VMware Server product has been quite popular since its 1.0 release in July 2006, it now competes with another free VMware product, VMware ESXi. While both server hypervisors are free, their use cases vary.

VMware Server 2.0 offers a lot of flexibility for installations where it's the better choice. Version 2 brings a dramatic new look to the product -- the familiar client has departed in favor of an entirely Web-based interface called VMware Infrastructure Web Access (VI Web Access). The Web interface, however, will likely require some adjustment if you're used to the 1.0.x version of the product.

Getting started with VMware Server 2.0
For this example, we'll walk through an upgrade of the release candidate installation of VMware Server 2.0 on a CentOS Linux system. Downloading the installation file is simple enough from the VMware website. The file is about 500 MB for both Windows and Linux editions.

While VMware Server is a free product, a serial number is required. You should have this information ready before you begin the installation. The registration process is quick and easy, and the serial numbers are available from the same page you download the product. A valid email address is required for the interactive registration process. Along with preparing the registration materials, it is a good idea to review the release notes for the product. One particular issue that I came across on another system was the presence of TCP/IP version 6.This issue prevented the underlying network services for VMware Server 2.0 from starting. 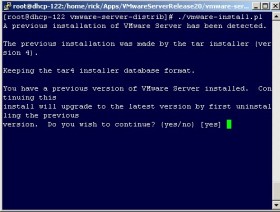 From here, a text-based wizard is provided for the installation. For Windows installations, the process is much more intuitive and wizard-driven. Linux environments can also go with the Red Hat Package Manager (RPM) installation method. Before the upgrade, you want to back up the VMs and make sure you can shut down any running VMs. That said, an upgrade may not be the best way to install the new version depending on your configuration. To prevent installation failure, it may be best to perform a full reinstall that removes most settings. Regardless of installation type, make sure to note the selected port configurations. In the example installation, the default port assignments were as follows:

Note the standard http connections option. If left at the default setting, it will require a browser entry with the port number. In this example, the browser URL would be http://vmwareserver:8222, and it would redirect to the correct login page. 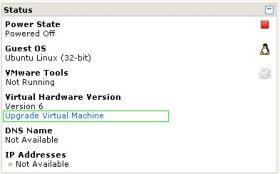 Once the task is complete, the VM version should read 7. Along with the "upgrade virtual machine hardware" task, each VM's guest OS VMware tools should be upgraded.

VMware Server 1.0 v. 2.0: Should you upgrade? VMware Server 1.0 is a dependable product. Version 1.0.7 was released on Aug. 28, 2008, less than one month before the 2.0 release. Keeping the 1.0.x series of VMware Server is fine, and for many installations there may be a training curve for the VI Web Access interface. Many test-and-development use cases of VMware Server have become accustomed to the thick-client functionality and upgrading may not be in the plans just yet.

As far as look and feel, VMware Server 2.0 is a major upgrade in the free hypervisor category, but it didn't change too much as far as functionality. The VI Web Access, however, is a big benefit for remote connectivity and management. When the host operating system needs to be available for other functions, VMware Server 2.0 fits the bill well.

ABOUT THE AUTHOR: Rick Vanover is an MCSA-certified system administrator for Belron US in Columbus, Ohio. Rick has been working with information technology for over 10 years and with virtualization technologies for over seven years.